…and so now all of my productivity is gone for about 12 minutes. An 846hp all-wheel drive (So that’s a thing now) Mustang racing through the streets of LA is worth a little Monday morning pick me up, right?

What do you think of when you hear the word “Torino”? I think of Turin, Italy (it’s called “Torino” in Italian) and Fiat sports cars built there over the years. I then think of the Clint Eastwood movie “Gran Torino”, which featured a 1972 Ford Torino not at all like our subject car. Our feature car is remarkable for its unremarkableness.
END_OF_DOCUMENT_TOKEN_TO_BE_REPLACED

Having been previewed at SEMA this last weekend, Gymkhana Six just went live on Youtube today. Take a watch, because I know you’d rather see Ken Block do donuts, than read my words 😛

We are fortunate in my neighborhood to have an independent gas station that sells non-oxygenated fuel; this is gasoline that does not have ethanol mixed in. This is a good thing for owners of old cars which tend have issues with the oxygenated fuel sold at big chain gas stations drying out the rubber bits in their fuel systems. I take The Healey to this station for fuel and frequently encounter other old cars while refueling. Today’s Street Parked car was parked in the service area (yes, this is a gas station where actual mechanics work) waiting for its turn on the lift.
END_OF_DOCUMENT_TOKEN_TO_BE_REPLACED 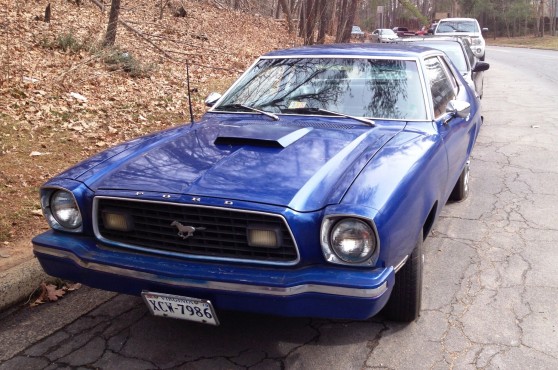 The Ford Mustang II is an important piece of motoring history. No, really. Many people consider this car to embody the worst of the Malaise Era: too small, too slow, too poorly built. I believe we need to look at the Mustang II illuminated in the era it was born to understand why it exists, and why it is actually a cool car.

The photos for this article were all supplied by a reader from the Miata.net car talk community who calls himself Analogeezer. Analogeezer and the gang at Miata.net’s Car Talk forum have been a wealth of great stories and anecdotes about most of the Street Parked cars (and many other topics).
END_OF_DOCUMENT_TOKEN_TO_BE_REPLACED

I just returned from a trip to Cuba where jaw dropping old cars are numerous at every stop light. This is the first of many Cuban Street Parked features we’ll be running; be sure to come back and see what Cuban treasure we have next (hint: old American cars with Scuderia Ferrari stickers). I didn’t need to venture far to find this 1956 Ford Fairlane Convertible as it was parked in the dropoff/pickup loop of my hotel in Havana. This was the first old American car in Cuba I got a close look at and I was pleasantly surprised by what I saw.
END_OF_DOCUMENT_TOKEN_TO_BE_REPLACED

You can’t watch this video and not like it. It’s impossible. Can’t be done.

I’ve seen quite a few hillclimb videos, and this one definately ranks in my top five. Yves Faber taking on the European Hill Race Eschdorf.

Last night, I got into a discussion about what constitutes a ‘sleeper car’. We came to the understanding that a sleeper was a car that would catch unassuming racers off-guard, either on the street or track. Now this Ford Granada wouldn’t really count as a true ‘sleeper’, because the half-cage in the back hints that there is something beast under the hood…

However, I wasn’t expecting this!

“When the dust settled, he had managed to cram a twin-turbocharged 4.7-liter Ford V8 from the heart of a Koenigsegg CCX supercar, good for a face-ripping 1,700 horsepower. An independent rear suspension from a 1999-2004 Ford Mustang Cobra handles putting that muscle to the rear tires and a set of massive Porsche brakes bring the whole party to a stand still. It’s a miracle of fabrication, determination and insanity. “- Quoted from Autoblog

Now this video, apparently, is of the car’s first start up, so there is alot of smoke. However, when it does get tuned and ready to go, God help anyone who comes across it.

Thanks to PistonHeads.com for the find

To be honest, I haven’t been following much of the World Rally Championship for the last few years. However, after reading Tim’s last post about why I should watch more WRC, it started to get me researching into more rally videos.

One thing I stumbled over was Ford’s 2011 review video of the WRC season.

I heard in the WRC news today that former World Champion Petter Solberg will be joining up with the Ford WRC Squad in 2012. I’m super excited for him. I’ve always liked Solberg, because I feel that Petter really has persevered while getting the short end of the WRC stick lately. I’m excited to watch the season unfold!

Now to buff up on my rally knowledge, so I know what I’m looking at… 😉

Who of our followers watch rally? Where should I start? Know any good rally blogs?

Super excited to finish P3 overall in the Bronze Pro class championship.
I finally got an overall win in a league race
Leading away 37 rookies for the upcoming season of SR604 Season 12. #drivercoach
Little victories.
Little victories, but I'll take the progress.
Ignore the crappy wire management, but #simracing escalated a bit in the last five years.
This picture marks the day that I finish old projects and start new ones.
Had an artist make a little rendition of my car for fun. @everydayracer126 #CL9 #TSX
31 cars showed up for GT4 Round 1, which is pretty exciting. #SR604